Skip to content
Your browser does not support JavaScript, or it is disabled．Please check the site policy for more information.
The Asahi Shimbun
National Report
article
By SOSHI KATSUMI/ Staff Writer
June 20, 2021 at 18:25 JST 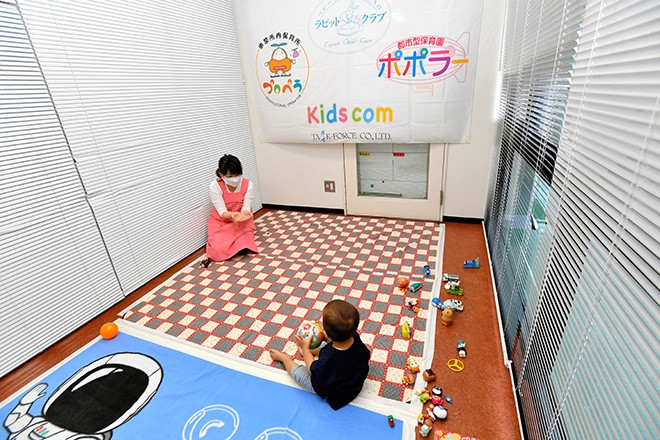 A nursery set up at the Ajinomoto Field Nishigaoka in Tokyo. NTV Tokyo Verdy Beleza player Azusa Iwashimizu used the facility for her son when a game was held May 30. (Provided by NTV Tokyo Verdy Beleza)
Female professional soccer players juggling the demands of motherhood and their sport will soon have the option of bringing their toddlers to the stadium to be placed in the care of a babysitter while games are in progress.
That, at least, is the goal of Japan’s first professional women’s soccer league when it makes its debut in September.
Officials with NTV Tokyo Verdy Beleza, one of 11 clubs in the WE League, short for Women Empowerment League, are pushing for the creation of a permanent nursery at each game venue as part of efforts to encourage players to continue their professional careers after giving birth.
A nursery was set up for a trial during a pre-season match against Albirex Niigata, another club in the league, held at the Ajinomoto Field Nishigaoka in Tokyo on May 30.
It was used by NTV Tokyo Verdy Beleza player Azusa Iwashimizu, a former member of Japan’s national squad. She returned to the pitch this year after giving birth to a boy in March 2020.
She arrived at the stadium on the same bus as her teammates. Iwashimizu took her son in a stroller to the nursery and entrusted him into the care of a babysitter.
The nursery was set up close to the pitch and locker room, enabling Iwashimizu to visit him several times before and after she did her warming up exercises.
Soccer games typically last two hours, including the half-time period. However, players are normally in the stadium for five hours or so to attend a preparation session and change clothes.
Setting up the nursery for NTV Tokyo Verdy Beleza was made possible with the cooperation of Task Force Co., one of the club’s sponsors and a provider of child care services.
“One of my dreams is appearing with my son during the player entry to the stadium before kickoff,” Iwashimizu said. “And that could become a reality now that a babysitter is on hand.”
Asami Otaki, a former member of the national team who is now with JEF United Chiba, said she plans to return to the pitch after giving birth. She announced her pregnancy in May.
These two cases are the exception, rather than the norm in Japan, as most of female soccer players retire when they get married or become pregnant.
The Japan Football Association, a governing body of the WE League, has taken steps to accommodate female players with offspring, as well as their fans with small children, to promote the new league.
The association decreed that female players can come back any time after taking a leave due to pregnancy or giving birth prior to the league’s inauguration.
It also urged each club to set up its own nursery for players and spectators to use when games are on in an effort to lure more fans to the stadium.
NTV Tokyo Verdy Beleza is set to eventually allow fans and staff managing games to use the nursery to make the league more friendly to mothers.
“We have now more female staff workers with small children than before,” said a club representative. “But they previously had to give up all hope of working at the stadium when games were held on weekends. We wanted to change that.”

Visit this page for the latest news on Japan’s battle with the novel coronavirus pandemic.

Cooking experts, chefs and others involved in the field of food introduce their special recipes intertwined with their paths in life.

The Asahi Shimbun aims “to achieve gender equality and empower all women and girls” through its Gender Equality Declaration.

Let’s explore the Japanese capital from the viewpoint of wheelchair users and people with disabilities with Barry Joshua Grisdale.
In-house News and Messages
BACK TO TOP
Copyright © The Asahi Shimbun Company. All rights reserved. No reproduction or republication without written permission.